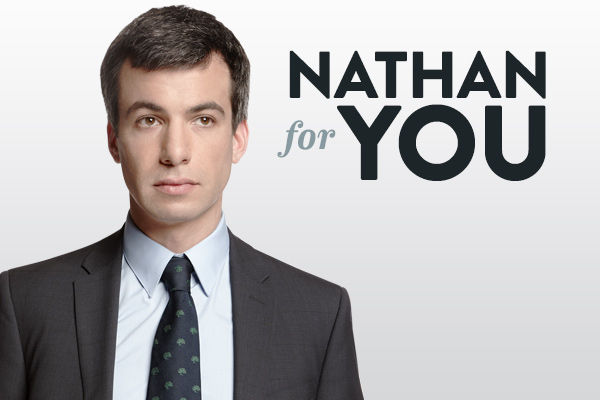 Nathan for You, if you’re unfamiliar, is a Comedy Central documentary series hosted by Nathan Fielder. Nathan (qualified by his “really good grades” in business school) finds small businesses that are underperforming and utilizes strange, out-of-the-box, and often controversial strategies to help them out of their slump.

I was first introduced to the show through a friend, who did a rather bad job of describing it. I will try to do a better. In one episode, Nathan teams up with a gas station to offer ridiculously low gas prices after a mail-in rebate. The twist? The mailbox for this rebate is on top of a mountain. So Nathan leads a small group of people determined to receive the deal they were promised (if memory serves, some rebates were as low as ten dollars). The mailbox is so high that they must camp for the night. As this motley crew awkwardly sits by the campfire, they begin to open up. Suddenly, we’re watching a random group of strangers tell each other their life stories. They laugh. They cry. We watch as these people we once judged (seriously, someone climbed a mountain for ten dollars) reach an emotional catharsis. And darn it, we empathize.

In another episode, Nathan promotes a frozen yogurt store by introducing a fecal-flavored dessert. While not every idea is classy, most of them are brilliant. And if nothing else, for every genuine moment you’ll get a genuine laugh.

There are two dozen episodes of the show and each episode covers two to three different businesses. It would be an injustice to try to describe these accurately, but here are a few:

Many of the show’s best moments involve the aforementioned controversies, some of which you might have heard due to the national coverage they received. Here are the big ones:

What appeals most to me about the show is the underlining humanity behind each episode. These businesses genuinely need help and not every idea works. In fact, many of them fail. Watching these people react to Nathan Fielder’s deadpan is what makes it that much more interesting. They take a real risk with these strategies and publicity stunts. To paraphrase Nathan, “what do you have to lose?”

There has already been a recap episode that premiered last week, where several people from previous episodes returned for a Where Are They Now segment. Some of the stunts that bewildered me actually paid off. These people are often much more successful after Nathan’s involvement. If you’re interested in the show, I suggest you start with this Thursday’s episode, the official premiere. You won’t be disappointed.

The fourth season Nathan for You premieres on Comedy Central on September 28th at 9 PM CDT.

Reviews and Editorials View all posts by andrewjamesogle

One thought on “Nathan for You | TV Editorial”