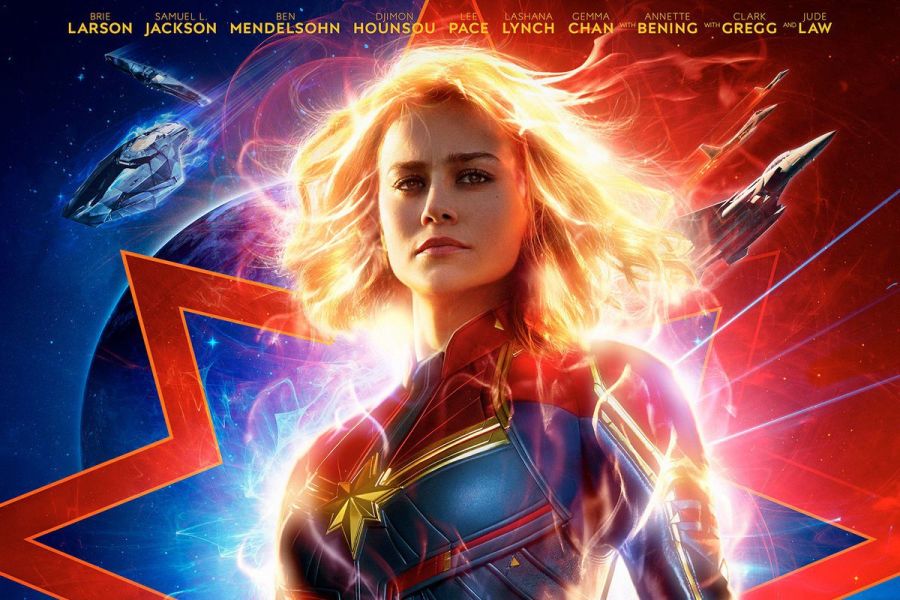 Captain Marvel is the latest installment in the Marvel Cinematic Universe (MCU) and for the most part it’s an acceptable one. Brie Larson stars as the titular character, aka Carol Danvers, an amnesiac who gains cosmic powers and joins the Kree alien race in the fight against another alien race, the Skrulls. When Danvers returns to Earth, she must work with Nick Fury (Samuel L. Jackson) in order to find the Skrulls before disaster strikes.

Larson is a little stoic as the titular character, and I only guess as to why. Jude Law’s character warns her to keep her emotions in check, an issue I don’t really see her having. It’s a little distracting to watch the Oscar-winning Larson deliver one-liners so stiffly. In one particularly awkward scene, Danvers’ friend Maria (Lashana Lynch) gives her a heart-wrenching plea to remember who she is… And Larson… just kind of stares at her.

Samuel L. Jackson’s Nick Fury returns and is as entertaining to watch as always. I’ll admit that I was a little disappointed in the CG used to de-age Jackson (Captain Marvel takes place in the 90s). Usually CG used on faces looks bizarre (sometimes humorously so), and while there’s several points of bad CG in Captain Marvel, Jackson really only had a couple of shots where it looked particularly bad. For the most part, I was quite pleased to see Jackson looking like his youthful days of Pulp Fiction and Die Hard: With a Vengeance.

Tonally, Captain Marvel attempts to be Guardians of the Galaxy: It’s got the pop music of the time and reference humor (yes, we remember Blockbuster and Radio Shack), and several of the same characters. But Guardians’ Peter Quill had his songs on a mix tape; they existed in the movie. He was abducted from Earth in the 80s, so his style is rooted into classic rock songs and movie references. Carol Danvers disappears from Earth in 1989 and returns to 1995. Her persona is not rooted in the time period, it’s just the time period our story takes place in it. The nostalgia is simply for the audience. It’s not the wrong thing to do, but it is flawed.

Now let’s address the feminism vs social justice vs sexism controversy. Yes, Captain Marvel was hit with negative reviews on Rotten Tomatoes before the movie even came out (something that the site has since addressed). As the first MCU film to have a woman in the lead role- shoot, I forgot about Ant-Man and the Wasp again- it does its job: it establishes a badass character, who doesn’t take crap from a man, and we end up liking her. My favorite parts include Danvers delivering a one-liner to Jude Law (if you’ve seen it, you know the one) and her reaction when a bad guy screeches in her face- she shouts out her own battle cry. In the end, no one really cares that Captain Marvel is a woman. They just want to see another Marvel movie.

Overall, I enjoyed the film quite a bit. It got quite a few laughs out of me, which is not something every Marvel movie can do. It’s not quite as forgettable as Ant-Man and the Wasp, probably because Captain Marvel will be the Avengers’ Hail Mary in Avengers: Endgame. I’m looking forward to it.

Reviews and Editorials View all posts by andrewjamesogle